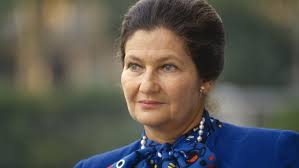 Simone Veil, a Shoah survivor, was a prominent public and political figure. But she was also a great woman of OSE and an honorary member of our Administrative Council. OSE honors her still vivid memory.

A prominent public and political figure… :

“Allow me to put it simply: for someone who walked across the fire of hell alive and had to say goodbye to many of her candid illusions, you do not appear to be very cynical, but rather very sweet and even cheerful and full of life.”

“What you are, in fact, is an eternal rebel. You are a feminist, but you do not agree with the theory that denies any difference between men and women. You are the defender of the weak, but you will not accept any kind of victimization.”

“The key of your popularity rests on the principles that you defend, against anyone and everyone, without ever raising your voice, and that eventually convinces everyone.”

“Like the great majority of the French population: we love you, Madam. You are most welcome in the chair of Racine who spoke so well of love.”

… Who always remained close to OSE

“The story of OSE is the story of Jewish children, some of who were still in their cribs, who were the victims of a relentless pursuit. Ripped out of their homes where they had found refuge, dragged inside those dark trains of death, they experienced the worst anguish and distress before meeting their final destiny.

They often shared those destinies with the doctors, teachers, and employees of OSE, who chose to stay by their side and die with them.

But the story of OSE, is also one of a relentless fight, both lucid and courageous, to save Jewish children. We are most grateful to the men and women which, often at the cost of their lives, took action against the executioners and snatched their victims away from them. And we mustn’t forget that, alongside them, stood many non-Jewish French, whose courage and benevolence allowed so many children to escape from the genocide.

Numerous survivors of the extermination never saw their parents again. Awoken from this nightmare, they had to learn how to live again. Today, by what they have become, they embody the very idea of the triumph of good over evil.” “May 1945. War has ended. And yet, the task of OSE is far from being over. The association helped the children survive, but it is not sufficient; now she wants to give them the will and joy to live.

OSE tries very hard to give all of the children she was entrusted with the most normal life possible, in spite of the traumas from the years before and the uncertainties that their future holds.

By creating the newspaper “Lendemains”, OSE gave them the freedom, the space that allowed them to face it all. Fifty years later, reading “Lendemains” stirs profound emotions, and it is the opportunity to honor the admirable action of OSE, which knew how to turn those lost youngsters just out of concentration camp into men.”