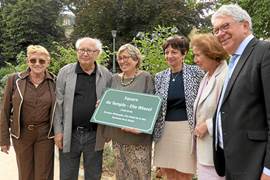 On June 29th, the Mayor of 3rd district of Paris, Pierre Aidenbaum, and Mayor of Paris Anne Hidalgo inaugurated the Elie-Wiesel Square du Temple, on the first anniversary of the death of this exceptional man.

Elie Wiesel passed away July 2, 2016. He was 87 years old. Since the announcement of his death, the emotion has been intense and tributes from around the world have followed, one after another, recalling the memory of the man of peace, the writer, the witness of history, engaged in the politics of his time.

We wish to recall the memory of this child of OSE that was Elie Wiesel, which he remained throughout his life. « Without OSE, I would not be here talking to you … », he confided in an interview given on the occasion of the naming of Elie Wiesel Children’s Home in Taverny in November 2008. Monday, July 11, 2016, at the town hall of Paris, under the auspices of the City of Paris and the Elie Wiesel Institute, a solemn tribute was paid to his memory, to which OSE was associated.

Among the many dignitaries present: the Prime Minister of France, Manuel Valls, the Mayor of Paris  Anne Hidalgo, the chief  Rabbi of France Haim Korsia, Elie Elalouf, President of the Elie Wiesel Institute, David de Rothschild, President of the Foundation for the Memory of the Shoah, and Jean-François Guthmann, President of OSE.